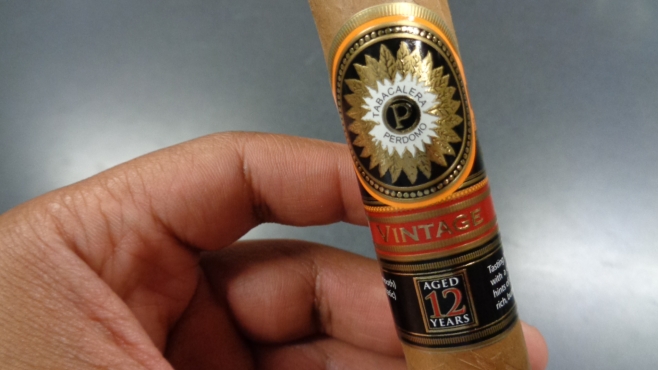 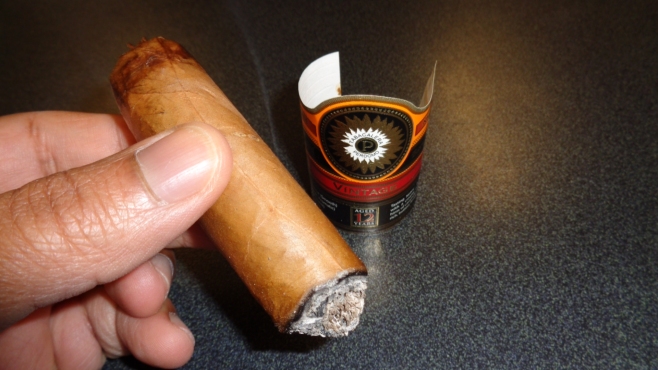 “A smooth smoke with a creamy complexity, slight hints of caramel and cedar, with a rich, buttery finish.”

This cigar is beautifully constructed, and Perdomo did something interesting with the cigar band by listing the blend of the tobaccos on it. I must say that this cigar had an excellent draw. This was a mild cigar, which is perfect for a morning smoke because it doesn’t have a lot of kick. It was very easy to retro-hale, and the retro produced great flavors out of the nose. This cigar took about an hour and a half to smoke. It burned very evenly, but there was a little bit of a flaky ash. This cigar was made using 12 year old tobaccos, and you could tell that this cigar was not rushed for production. The double aging process is pretty unique. The tobaccos are first aged for 10 years in bales, and then are aged for another two years in white oak bourbon barrels. I could really taste the bourbon barrel on the retro-hale. This was a creamy cigar and I would agree that it has a buttery finish. I believe this would be a great cigar for someone that is just getting started with smoking cigars because it is mild, and not too strong. The retro-hale is very tolerable and didn’t burn at all. The entire cigar was very well balanced and was simply a pleasure to smoke. The cigar began to get sweeter as I entered the final third of the cigar, and it left a nice sweet finish on the exhale. The final third was absolutely delicious. There were hints of cream, and sweet caramel in the final third of the cigar as well. To this cigar’s credit, it had several transitions and evolved very nicely.

Need a great ash tray for the house?